I am going back and posting all of my previous book reviews so that they are listed on my site in chronological order. The reviews are dated for the time when I read the book, hence the reason many of them will be listed for times before this website existed.

The next up on my reading of the 306 greatest books is Emma by Jane Austen. This book can be found on the Observer and BBC Book Lists.

Coming into Emma with a fairly large preconceived notion about the Austen/Bronte books of the time, I was pleasantly surprised and this book was actually better than I was expecting. Once I got passed Austen's round-about way of speaking the book rather intrigued me. The story is about a female in her early twenties among the upper class social scene of rural England. She had vowed to never marry in order to not stress her father. Instead of indulging in her own love-life, she then tries to hook up her friend Harriet. The problem comes when Emma realizes that she is really bad at playing match-maker and eventually causes more problems than if she had just left everything alone. The story wraps up very nicely in a happily-ever-after ending. My biggest complaint of the story is that the language used made the book very difficult to follow at times and Austen could have definitely used "by the bye" far less. Although I enjoyed it, I do not recommend it, especially compared to Austen's much better and more famous Pride and Prejudice.
Posted by Jim L. at 7:20 AM No comments:

Note - This was originally published on my other site "The Geology P.A.G.E." but due to the content I have moved it here and backdated the post.

That's right, maybe a month too late but here is my recap of the blizzard of 06'. Declared a National Disaster by FEMA and commented on many to be worse than Katrina. OK, don't get me wrong. I am not stating this was worse than Katrina, or even close. But it was pretty bad. We lost power for a week and some didn't get back power for at least a week and a half. Our internet service and cable took a little longer to come back.

Here are some pictures: 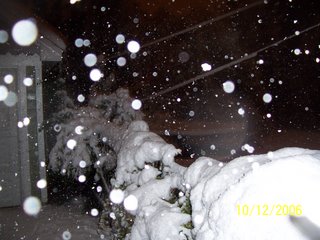 Actually during the storm. Hard to take pictures at night in a snowstorm. 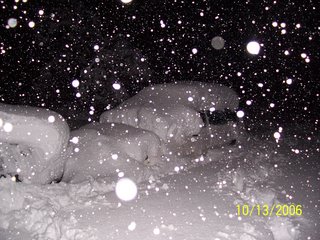 The cars were under the snow, at least 2 feet fell that night. 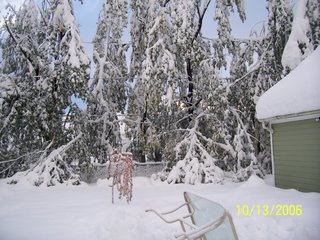 Our backyard, the morning after. The reason that most of the region lost power was due to the wet heavy snow taking down the branches on the power lines. You can see the branches ripped out, broken and laying in the snow drifts. The table was tipped over the prevent it from breaking. 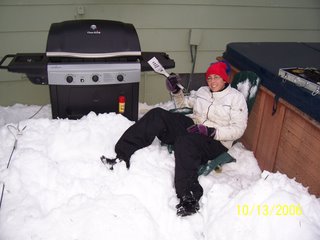 Yup, no power means no microwave, no oven, no heat, no lights. Only candles, hot water (thank you gas) and a stove (again, thank you gas). So after deciding we needed to get rid of all our food and quick it became hot dog night on the grill.
Posted by Jim L. at 9:28 AM No comments: