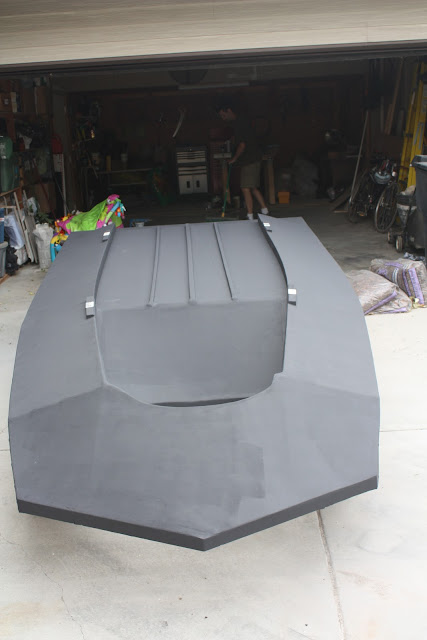 As mentioned before, my goal this summer was to finish the bottom of the hovercraft. Well it is done for now. It still needs the skirt strips and the actual skirt but for now it has been flipped over after this final paint job with bottom paint.


You can check out the process from start to finish over at my website.
Posted by Jim L. at 9:27 AM No comments:

Email ThisBlogThis!Share to TwitterShare to FacebookShare to Pinterest
Labels: Hovercraft

3. Balance our budget
January 1st - Things are looking up for this year with Veronica getting a new job (hopefully) after residency is complete.
February 1st - Working on it but large expenses due to medical stuff not helping.
March 1st - Getting worse but tax refund should put us back to where we were at the beginning of the year.
April 1st - Tax refund helped up get slowly back on track
May 1st - Eh
June 1st - Still eh
July 1st - And still eh
August 1st - Getting worse
September 1st - No paychecks for 2 months but we should finally be getting back on track this month.
October 1st - New jobs finally paying, not sure if we are going to hit this goal though

Other items of interest:
September I basically spent working on my research. Finished the bottom of the hovercraft which was pretty monumental but other than that, not much done.