I took these pictures on my wife's and I anniversary dinner back in February when we went to La Caille restaurant, which is often regarded as the most expensive restaurant in Salt Lake City. And going there again for a Mother's Day Sunday Brunch reminded me that I had them so I figured I would post them. 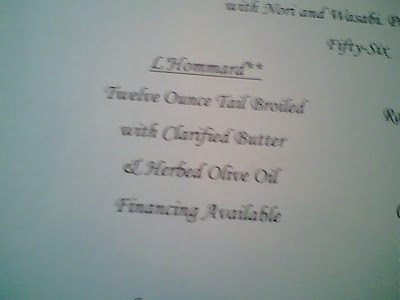 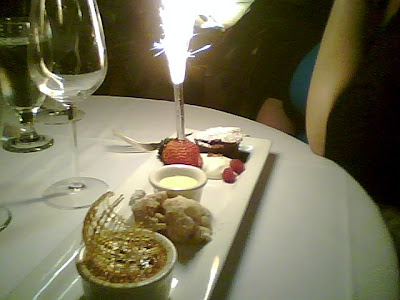 Sorry for the blurriness, I took them with my phone. But I think that it is great that they played off of their expensiveness with the first one. It may be difficult to read but all the menu items had a price spelled out (i.e. Fifty-Two Dollars instead of $52). So when we came across this one we weren't sure if they were serious or not (it states Financing Available). They were rather humorous about it though and the waitress confirmed that it was indeed a joke. Plus for our anniversary they gave us this firecracker candle with our desert, which really made it special.
So, all in all, I think the food was really good and the ambiance was fantastic but the price a little high for dinner (it was roughly $200 before tip). But Sunday brunch was less than half the cost of dinner, I think tasted even better, and you had the same ambiance. So I say if you going to check it out, go during Sunday brunch. You definitely won't regret it.﻿
Posted by Jim L. at 12:04 PM No comments:

Four months in (a little late):

3. Balance our budget
January 1st - Things are looking up for this year with Veronica getting a new job (hopefully) after residency is complete.
February 1st - Working on it but large expenses due to medical stuff not helping.
March 1st - Getting worse but tax refund should put us back to where we were at the beginning of the year.
April 1st - Tax refund helped up get slowly back on track
May 1st - Eh

4b. Read 2 of the Top Ten books on Zanes book list
January 1st - I currently have 6 read. I figured I should be able to finish 2 of the 4 since 2 of them are very very long.
February 1st - The book I'm currently reading, Lolita, is on the list.
March 1st - Finished Lolita. One to go.
April 1st - Still one to go.
May 1st - Still 1 to go

7. Finish bottom of hovercraft.
January 1st - I just need to finish epoxying and smoothing out the bottom then paint it. Not too much work but time is an issue.
February 1st - Haven't had time to work on it
March 1st - Nothing new
April 1st - Nothing new
May 1st - Did some work patching the holes that need to be filled and order some more epoxy.

Other items of interest:
Finished up the semester. Nothing else really big happening. Just trying to tie some ends up from the semester before I can move on.