The next up on my reading of the 306 greatest books is Madame Bovary by Gustave Flaubert. This book can be found on the Sybervision, Norwegian, Observer, Zane's Top 10, and My Book Lists.

The first thing I noticed while reading Madame Bovary was how well is flowed. One idea flowed into another, most of it without a break or pause. Seemingly unconnected thoughts were put together seamlessly in a string of narrative that I could only hope to replicate. I loved reading this book, especially after The Canterbury Tales, since the language was so much easier to follow and I'm not trying to decipher what the author is saying, I'm just enjoying the words. I did have some problems with the book though. The first being the very weak female characters, especially the main character. She seemed mostly to be reacting to events in her life and not being proactive in any of her choices. Nothing she did was really in response to what she wanted and more in response to what someone else wanted. And her child was the most useless of characters, almost inconsequential for 99% of the story. So, even though it did have some weak points, it was a marvelously written story and I would definitely recommend this as a must read.
Posted by Jim L. at 9:14 AM No comments:

3 months in, a little delayed in posting this, but here it is

3. Balance our budget
January 1st - Things are looking up for this year
February 1st - Working over the winter break helped, a $1700 car repair bill did not
March 1st - Going the wrong way, another car bill as well as a new carpet and apparently I owe on my taxes, great.
April 1st - Working out those extra expenses a little bit at a time

4. Read a total of 100 of the greatest books on my lists
January 1st - Current count 86
February 1st - In the middle of Cantebury Tales
March 1st - Took a break from Cantebury Tales, time to get back
April 1st - Finished Cantebury Tales. 13 left to go. Reading Madame Bovary now

Other items of interest:
School has been ramping up. But good notes of interest are that I finished the Gummy Bear's room and we are all set for he/she to show up. The patio is almost done, only a little bit more to work on the landscaping around it.
Posted by Jim L. at 7:26 AM No comments:

So the Gummy Bear's Room is done for the most part. Thanks to spring break for giving me the time to finish it. Next up on the to do list is finish the patio. Almost done with that as well. So things that were done on the room:

1. History - Well when we moved in there was paneling on the wall so Veronica ripped it out right away. I then had to re-plaster the walls since there were large tears through the dry wall. We then painted it (twice) and made it into the guest bedroom. We never put in any baseboards because we were gonna change the carpet. So when we painted we never laid anything down and the carpet ended up being really gross.

2. Next step: we moved all the furniture out of the guest room. Side table is in the hall, guest bed got moved to my office, and the dresser still needs to be redone for the Gummy Bear's room but it will probably be placed in the closet to be out of the way.

3. We then painted the Gummy Bear's room. We picked a Classic Winnie the Pooh theme and since we don't know the sex of the baby went with yellow and green paint. Veronica wanted to do a horizontal divide between the colors so we ended up deciding a chair rail will go through the middle of the room. Initially the room had 3 walls the same color then the window wall was a darker color.

5. Afterwards a new carpet got placed. you can kind of see it in the picture below. 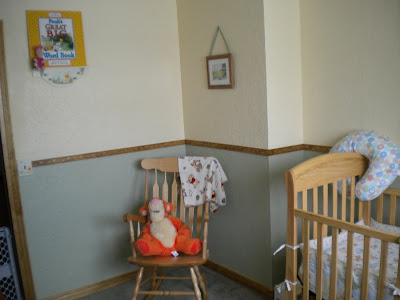 6. The next step was to place in the baseboards. We chose an oak stain for the furniture, the baseboards, and the chair rail. You can see both in the picture above. After that I had to touch up the pain around the chair rail since I had to sand the wall smooth to put it in. Also the ceiling had some of the old paint on it (good taping job this time, not so much the last time). And the wood filler needed to be stained that was put in to fill the gaps in the corners of the room. 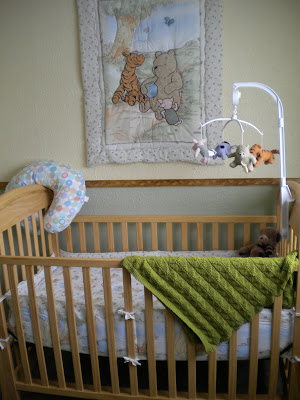 7. After that all that needed to be done was hang some stuff on the wall, get curtains, and put together the furniture. My mother bought us most of the furniture and it looks great (Thanks mom :-)) except for the rocking chair which a gift from Veronica's mother and grandmother (Thanks In-Laws :-)) 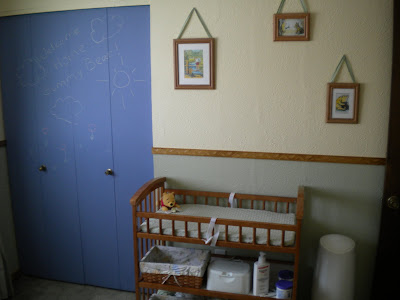 8. We also decided to do something different with the closet door. It basically was a piece of crap so we wanted to paint it but we weren't sure what. Veronica then came up with the idea to paint it with chalk-board paint, which apparently can be tinted to different colors. So that is what we did, got a purplish paint that matches pretty well. We also replaced the closet doors in our room in the process, changing the mirror doors to a nice white panel doors. 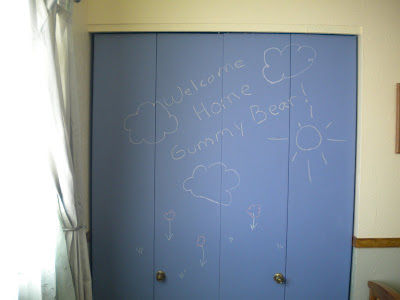 9. One of the last things to arrived was the light switch cover on Tuesday, this then let me put up the rest of the chair rail and the room was basically done after that. 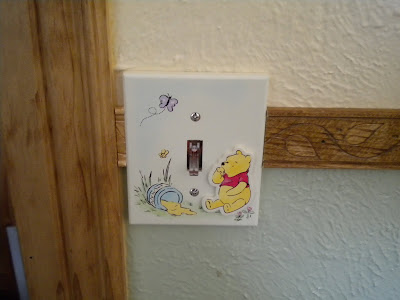 10. Some things left to do: Strip and stain the book shelf and the dresser for the room, and that's about it. This will help to organize the closet a little more than we have it right now. 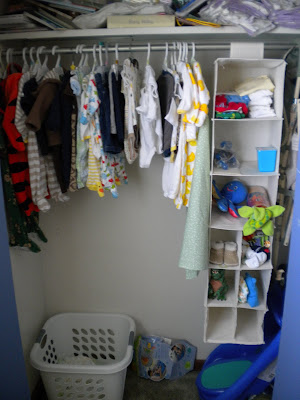